Reflections on How Reality Is Made

this is a short excerpt from Introduction To Lines Of Force. Buy the book. You won’t regret it. 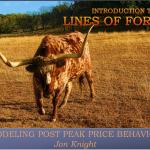 …These forces are not filling up the empty space of the chart as much as they are creating the fabric of the chart itself. Without conflicting forces, there would literally be no price whatsoever, and therefore no chart to examine.
These forces are very real, and as they interact they create the price we see. Imagine no downward forces: price would rise to infinity which would mean you could never sell as no one has that money. End result? Stock is worthless as it cannot be traded. No upward forces? Same result. Worthless stock.
The only reason price exists is because upward and downward forces are in constant conflict. In any system of conflict, lines of turbulence emerge, battle lines between disparate forces. Without this constant conflict, systems such as these lack balance and will eventually fail. If you’re long, thank a short.

Category: ebook | Comments Off on Reflections on How Reality Is Made

I am pleased to announce publication of Introduction To Lines Of Force! 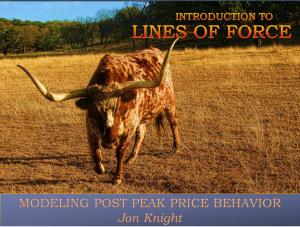 I’ve included as much as I could to create a definitive Introduction to Lines Of Force – you’ll find both the conceptual basis and step by step instructions for exposing all the basic artifacts you’ve seen in my models.

After reading this book you will be able to recognize them without any help, draw them without reservations and use them to make your profits grow. Plus, you will be welcomed at the Lines Of Force Masters Lounge, a forum dedicated specifically to helping us all perfect our LOF skillset.

Category: ebook | Comments Off on Get Yours Now!